Andreas Clenow is a Swedish Swiss author, asset manager, and entrepreneur based in Zurich, where he is the Chief Investment Officer of a family office. He has been a tech entrepreneur, a financial consultant, hedge fund manager, financial engineer, quantitative trader, financial advisor, board member, and a middle management corporate bureaucrat during his illustrious career.

Andreas likes to claim that his first job was as a tech entrepreneur during the 1990's Dot-Com boom, but that is not true. Years before that, he was a freelance reporter for a tiny local newspaper in an even tinier Swedish town, one which proudly used the slogan "cow densest town of Sweden" and organized cow festivals to desperately try to attract tourists. Perhaps one day, his shrink will establish that this is where his passion for writing, and fear of cows, originated. Covering cow bingo is known to have such effects on people.

Having moved to The Big City in 1994, he pretended to study at the School of Economics at Gothenburg University, while starting his first tech company. It was a weird time for anyone who understood computers, and a hobby which was embarrassing in 1995 became a hard asset in 1996. Companies were throwing money at anyone who knew how to terminate a coax, and if you could figure out how to install a TCP driver, it was almost a crime not to start a company.

By 1999, Andreas had somehow managed to graduate with a master's degree, and he decided to try out the whole grownup thing, getting an actual job. In retrospect, it seems like fair timing to get out of tech entrepreneuring. Showing up at a job interview in Stockholm, he was armed with a computer game based on the 1982 film Tron, which he had built in Excel VBA. Even though the game crashed during the demo, and his poor attempt at humor fell flat, he somehow landed a job as manager of a Nordic group of financial consultants.

Two years later, Andreas was on a never-ending conference call, when his boss got tired of waiting, took a pen and paper and paper, scribbled something on it, and put in front of Andreas. It said, "Three months in Geneva, you leave tomorrow." That was in 2001 and, Andreas still hasn't moved back to Sweden.

At the Geneva HQ, they were under the delusion that Andreas was the only person in a company of a hundred thousand people who could deliver a very specific project. Not above taking advantage of such delusions, Andreas claimed that the only way he would be interested in doing so, would be if they promoted him to some sort of global manager with a fancy title and a lot more money. Much to his surprise, they agreed.

It was in Geneva where Andreas learnt all the secrets of corporate management. How to pretend to be too busy to take anyone's phone call, how to steal headcounts from unsuspecting corporate minions, how to hire buffer headcounts in case someone gets lucky and steals some from him, and how to speak for hours without actually saying anything. Most of all, he learnt that his dislike of cows was only surpassed by his loathing for teleconferences.

While looking for a way to escape corporate purgatory, Andreas had a chance encounter with a senior Zurich banker of one of the most prestigious private banks in Switzerland. To the surprise of no one, this respectable banker had a few dozen millions in offshore accounts, hiding behind a Panama shell corporation, and now he wanted to start a hedge fund to trade this, and other presumably less-than-white money, while keeping his well-paying job at the private bank. Before he knew what hit him, Andreas had gone and become a hedge fund manager.

Andreas learnt a great deal of things from starting a hedge fund with such a banker. He learnt the legal intricacies of setting up offshore hedge funds and asset management companies, how to design and trade quantitative trading strategies, how to raise institutional money, and how to swim in shark infested finance waters. Most of all, he learnt not to do business with such people again.

In more recent history, Andreas has been lucky enough to have been part of a great many projects, companies, and investments. He has managed quantitative trading products, acted as an advisor to family offices, been on the board of companies, and managed investments in merchant finance, salt water disposal, private equity, and real estate.

During all of this, he also rediscovered his passion for writing, and found a topic which doesn't involve cows. Andreas was as surprised as anyone that his 2012 book on futures trading, Following the Trend, became an overnight global best seller, and he saw no other option but to cash in with a sequel - the 2015 Stocks on the Move. Since that too became a best seller, he decided in 2019 to throw a curve ball with Trading Evolved - a book about programming, or at least a book on how to actually code these kinds of financial strategies.

It appears as if the readers fell for his trick, and bought the programming book, thinking it was a regular trading book. Having been able to get people to actually buy, and pay for, a programming book, he now has the gall to think that he can become an actual author, competing with educated native speakers who do this for a living - the kind of people who don't make silly spelling misstakes and who can write good.

And that, for those of you who actually read all the way down here, is why you should go and buy A Most Private Bank. The best finance noir novel by a Swedish Swiss hedge funder you'll read the whole week. 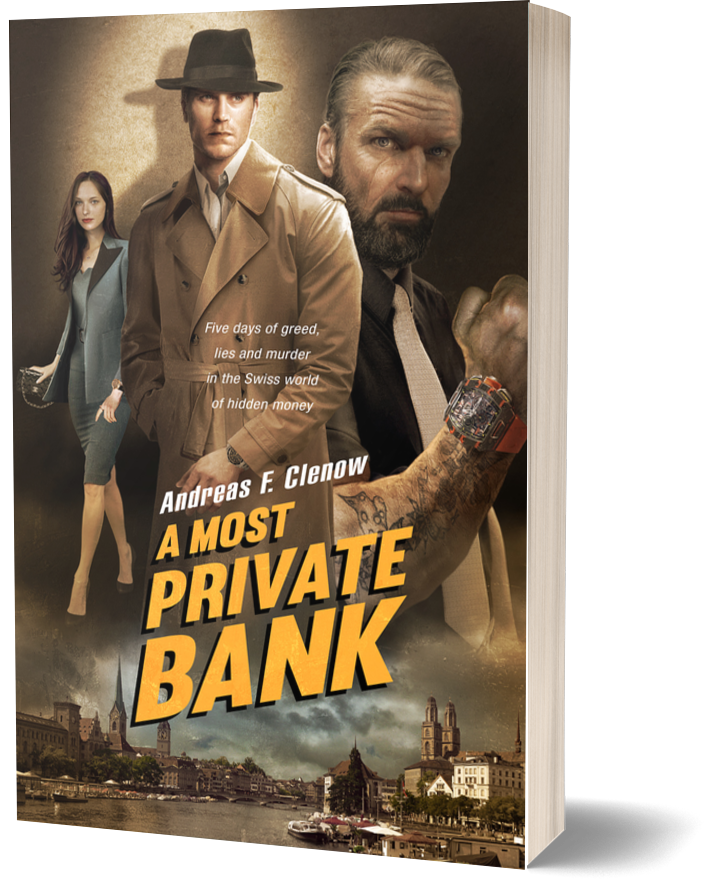